Many of us are familiar with the red or green beam of light from laser pointers that may be useful during presentations to direct the attention of an audience. Perhaps even as a toy for our cats who seem to love chasing that little beam of light? Sometimes these laser pointers are also used as a toy for our dogs. There are many videos online of dogs running around in circles chasing the light from a laser pointer and often people are heard laughing in the background.

But are our dogs and cats really having fun chasing a light they can never “catch”?  More importantly, are laser pointers even safe for them?

According to Jennifer Coates, DVM (2017), cats can become obsessed, or constantly preoccupied to a troubling extent, when focused on chasing the beam of light from the laser pointer because it sets off the predatory sequence of stalk-pounce-kill-eat. They can also transfer this predatory behavior to chasing other sources of lights and shadows. The problem is the predatory sequence is never followed to completion since there is nothing at the end of the light to actually catch. Without having a reward for the behavior of chasing, cats can become frustrated and agitated by this game. If you still want to use a laser pointer to give your cat a chance to chase something, it’s better to use the laser light beam to direct the cat to a toy or treats so they will be rewarded for their efforts. But remember to never direct the light beam into their eyes.

The best options are to use a kitty fishing pole or treat dispensing toys so they have a toy that satisfies their need to “catch and eat”, the human can avoid using a laser pointer at all, and the cat can avoid endless preoccupation with chasing lights. 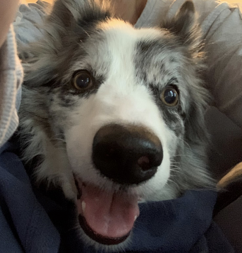 Power, a Border Collie, displaying an anxious facial expression. To an untrained eye this may look like a smile. Note the wide eyes and the corners of his mouth pulled back and up, both are signs of anxiety.

Professional dog trainer Monica Crowley says, “I tried a laser pointer for play with my prey-driven lab mix, Dublin. While she loved it at first and was getting great exercise around the house, it left her extremely frustrated when there was nothing to “catch” once she got to the light. I tried holding the laser pointer steady and placing a high value treat when I wanted to end the game and turn the laser pointer off, but that did not satisfy her. After putting the laser pointer away, she was noticeably stressed and over-stimulated and was pacing around. It made me feel guilty that I had caused this frustration. While I had good intent, the unattainability of laser pointer play caused her stress, which is why I would never use one again and stick to other attainable games for a prey-driven dog like flirt pole use or lure coursing.” Not all dogs may respond like Dublin, but is it worth the risk?

The act of chasing a beam of light from a laser seems like a good idea to humans, because it burns off excess energy, it’s mentally stimulating, and is a game to play inside during the heat of summer or on a rainy day. Just like our cats, chasing a laser pointer’s beam triggers the dog’s prey drive. And just like our cats, according to AKC.org staff (2015), our dogs not having anything to catch can lead to frustration and OCD (Obsessive Compulsive Disorder) behaviors when the “prey” (light) suddenly disappears. OCD is a genetic disorder, and laser pointers can’t cause OCD, but laser games may trigger it. So, is it worth the risk?

In email communication with Dr. Soraya Juarbe-Diaz, a board certified Veterinary Behaviorist, on laser pointers and OCD behaviors in dogs, she said,

“It’s pretty much the consensus that there is an underlying genetic predisposition present (regarding OCD behaviors)….triggers just allow the manifestation of the disorder. That is, playing with a laser toy does not cause OCD anymore than eating peanuts causes a peanut allergy. You have to have the genetic predisposition in order for the trigger, laser pointer or peanuts, to provoke the signs of symptoms. In the absence of a laser light toy as a trigger, a patient (dog) with OCD will respond to any similar stimulus: reflections, indoor or outdoor shadows, balls.”

She states she has dealt with several shelters, in the past, that used laser light toys in their cat rooms because it “streamlined the use of volunteers’ time” without resulting in an increase in stereotypical (repetitive, non-functional) behaviors. She goes on to say that in nature an animal’s attempts at hunting are not 100% successful and while that is certainly frustrating, nature itself does not support the development of OCD behaviors. Dr. Juarbe-Diaz also emphasized the difference between an animal that appears to be “focused” on their job or possibly a favorite toy versus being “obsessed”-earlier defined as being constantly preoccupied with something to a troubling extent. She states it is important to pay attention to the context of a behavior and the individual animal’s response to a trigger, like a laser pointer light beam. Dr. Juarbe-Diaz best recommendations are to use any toy in moderation, look for behaviors that indicate a problem that needs to be investigated, encourage variety in playful activities, and offer occasional rewards to maintain interest.

After a laser play session dogs may continue to look for a lightbeams to chase which might include chasing reflections from sunlight, chasing shadows, or obsessively following the light from a flashlight. Angelica Steinker, a Certified Professional Dog Behavior Consultant states that she has had many clients use laser pointers as toys, but that at times this game may have triggered unintended consequences. As a result, she recommends against laser pointer play. Several of her clients have reported that the laser chasing triggered light chasing that the dog did not exhibit prior to playing with the laser pointer. In one case laser pointer play elicited the client’s dog to dismantle the family Christmas tree– as the reflections coming off the decorations appeared as dots on the wall, that looked like the laser pointer game. When the family returned home the tree had been accidentally demolished by their dog, “ruining Christmas”. 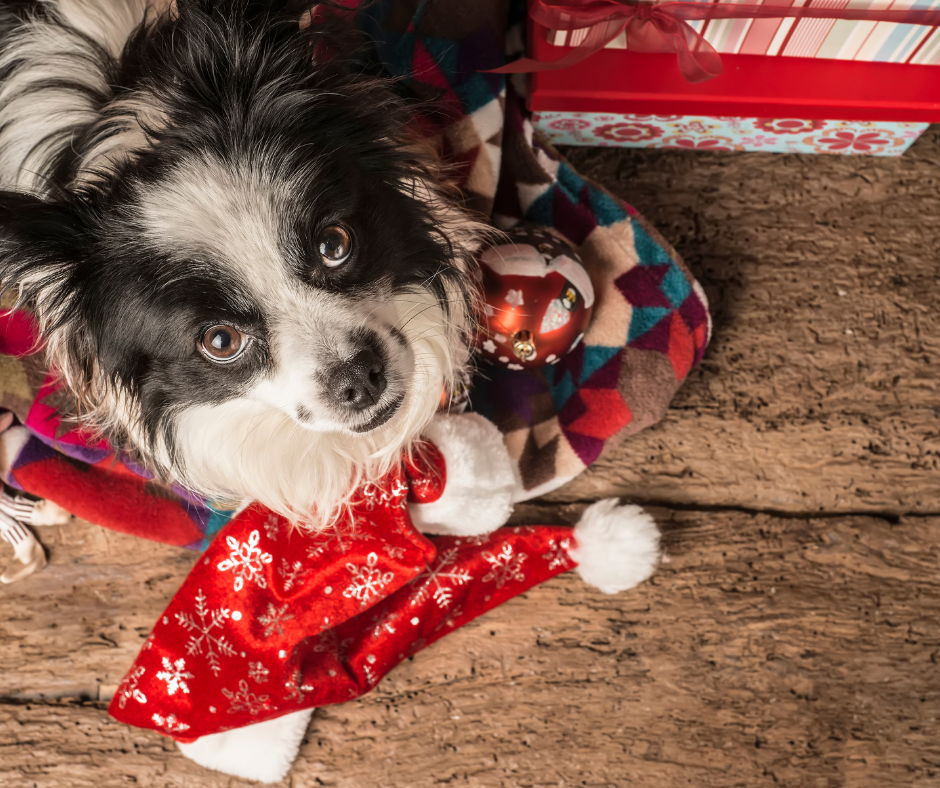 Sometimes dogs sustain serious physical injuries in their attempt to catch the light. AKC.org recommends using flirt poles instead, which are similar to the kitty fishing poles, or the sport of Lure Coursing where they actually get to chase and catch something. Angelica Steinker goes on to say that as a dog sport enthusiast she worries about the proper use of flirt poles, fishing pole type toys designed for chasing play. She says,

“Flipping a flirt pole through the air causing a dog to leave the ground with all four feet, is in my opinion physically dangerous. I recommend that flirt poles are used to tease the dog to run in a circle and to avoid leaping and jumping.”

Karen London, PhD (2017), states working dogs who are trained to find explosives or drugs will become frustrated if they don’t have a “find” at the end of their search. These specially trained dogs need regular successes to prevent frustration and their handlers provide practice missions where their dogs are guaranteed to discover something at the end of their search. Their handlers and trainers know that these practice missions will maintain their dogs search and find skills while also preventing psychological and behavioral problems. Without the reward at the end of the predatory behavior sequence, these dogs may transfer that sequence of behavior to similar stimuli-which is what happens when a dog has learned the behavior of chasing a laser light and they transfer that behavior to chasing other lights or shadows.

It is also important to understand the risk of permanently damaging vision when laser lights are shined directly into another’s eyes. According to the American Academy of Ophthalmology, or AAO, (2018) the risk of permanent damage to a human’s vision was documented in 2018 when a boy from Greece shined a laser light into his own eyes. While humans can actually look away from the laser light or even blink to interrupt the beam, an animal will not likely know to do this to protect their vision. The greater the energy output from the laser the more likely permanent damage will be. The FDA regulates laser devices and their tests have found that 60% of laser pointers are overpowered when compared to what their label indicates. Many times the FDA has discovered that full product details are missing on the laser devices and many laser lights are marketed as toys that are readily available to everyone-including toys for our dogs and cats. The typical pen sized laser pointer that requires AA or AAA batteries is likely to exceed 5 milliwatts of energy ( which is considered to be the safe limit of power) and the FDA has documented that anything over 5 milliwatts decreases the chance for a safe exposure to the laser light. While red and green laser lights are more common, it is the blue and violet laser lights that pose the greatest risk to damage vision. Currently, there is only one company (Amazon.com)  who sells laser lights that requires a compliance test record on the devices, making it harder to sell mislabeled and over powered laser lights. 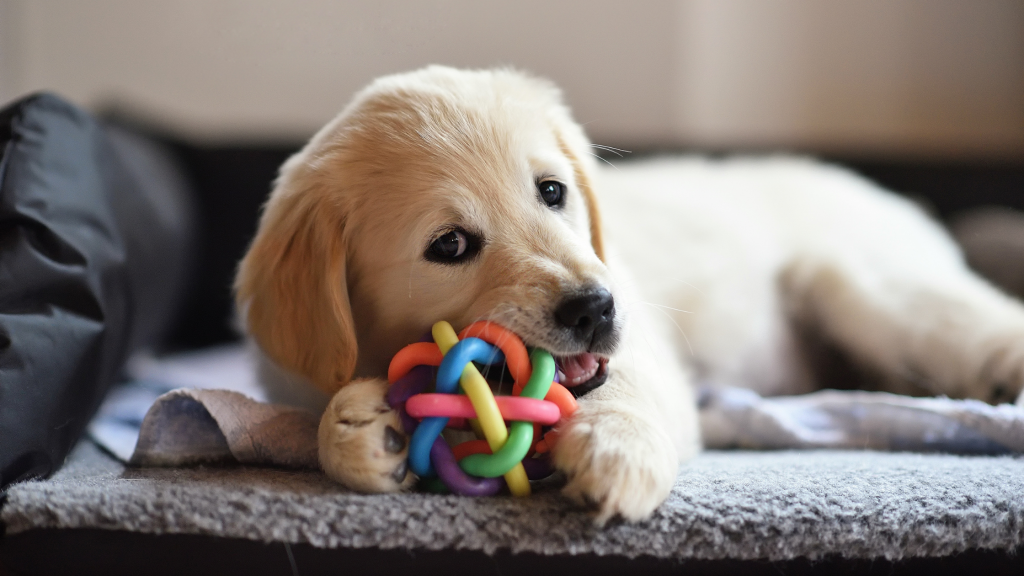 A final potential concern with any toy and also laser pointers is that they may trigger manipulation and control and at its worst, sadism. A laser pointer is extremely easy to control with minimal human effort thus to some degree disengaging the human in joint play and having the dog do all the work. This power inequity could lead to dysfunctional play and at its extreme sadism. Children should most definitely not play with dogs unsupervised and this applies even more so to laser pointer play. For any family with children the additional risk that the child may point the laser at their own or another persons eye, should also be a concern. Any dog parent reading this article truly loves their dog but can they trust their roommates, pet sitters or neighbors to share their common sense and values?

There are many great options for helping our dogs to safely expend excess energy while having fun with their humans. Some of these options include, dog sports like agility and lure coursing, trick training, dock diving and scent detection.

Check with your local force-free dog trainer or dog training school to see what is available in your area and for ideas. Before teaching your dog (or cat) to chase that laser pointer beam of light, consider the serious risks associated with these devices and safer options. We suggest erring on the side of caution and to avoid using laser pointers as a toy for any animal.

London, Karen B., PhD. Dogs Chasing Laser Pointers: How I hate this habit!  11/2017. The bark.com. Available at: https://www.thebark.com/content/dogs-chasing-laser-pointers.

Soglin, Ari. Is Your Laser Pointer Dangerous Enough to Cause Eye Injury?  6/22/2018. AAO.org. Available at: https://www.aao.org/eye-health/news/laser-pointer-eye-injury.