The Giant African Land Snail is an incredibly dangerous snail invasive to Florida, and it is also irradicated with an equally dangerous bait, metaldehyde. Florida has previously successfully eradicated these snails, and plans to do so again, but in the meantime everyone should remain vigilant for both themselves and their pets, as thousands of snails have been found in Pasco County and could be found elsewhere.

The snail itself poses a large public safety risk as it is known to carry the parasite Angiostrongylus cantonensis, or rat lungworm, which causes meningitis in humans and other animals. Just touching the snail can be dangerous, so both humans and animals should avoid these snails at all costs.

The main danger to dogs is actually the bait used to kill the snails, metaldehyde. Just a small amount of metaldehyde consumed by a dog or other animals can poison them, whether it’s consumed directly or by eating a snail that has itself consumed the bait. Dogs and other animals should be kept entirely away from any area that may have been treated for these snails.

Though less common, the snails themselves can also be dangerous to dogs just as they are to humans, as they can pass on the potentially fatal rat lungworm parasite to dogs. In addition, these snails have been found to carry several other parasites dangerous to dogs and other animals.

Animals which have been impacted by metaldehyde poisoning will experience seizures or other similar types of shaking with a high fever. The onset of this sickness happens quickly and could be seen in just minutes. Here are some other symptoms to watch out for:

As this poisoning is incredibly dangerous and fast-acting, any animal that has come into contact with metaldehyde should immediately go to a veterinary hospital so that they can begin supportive care to manage the symptoms and give the dog their best chance of survival.

Essentially all of Port Richey and New Port Richey has been potentially infected with these snails, with the main outbreak of snails so far being found by the intersection of Massachusetts Ave. and Rowan Rd. This area has been treated with metaldehyde and should be completely avoided by people and animals if possible. This is currently the only area that has been treated, but you can visit FDACS.gov/GALS or follow the Florida Department of Agriculture and Consumer Services on social media @FDACS for further updates on the situation.

Are Dogs the Solution?

There is a bit of good news in this concerning situation. Recently, dogs have helped us with everything from sniffing out cancer, bombs, citrus disease, and possibly Covid-19, and now they’re adding another scent to their resume: the Giant African Land Snail.

Four Florida dogs are actively inspecting shipping facilities around Florida for these snails. These dogs began their training in the USDA’s Plant Protection and Quarantine program during Florida’s last outbreak in 2017 and have been trained on the scent of these snails and the diseases they carry. They have been now presented with the scent of the current strain of snails in the outbreak so they can continue to accurately find these snails, helping Florida precisely target infected areas and shipments.

How You Can Help

As a Floridian you are likely familiar with how you can discourage mosquito breeding by preventing puddles forming in your yard., Similarly you can discourage Giant African Snail breeding by clearing your yard of any hiding spots: damp leaves, debris, logs, overturned flower pots, or other large areas that a snail could safely hide in.

Furthermore, if you’re purchasing a snail, ensure that you do not accidentally purchase one of these dangerous snails. Any animals you may have in your possession should NEVER be introduced into the environment: call your local wildlife office if you’re not sure what to do with an animal.

Keep your eye out for the snail. Here is some information on how to spot them.  Below are pictures of both the snail and their eggs. You should also be on the lookout for signs that snails may be around, such as mucous trails and damage to plants.

If you think you see one of these invasive snails, the Florida Department of Agriculture requests that you take a picture and contact the DPI Helpline at 1-888-397-1517 or DPIHelpline@fdacs.gov for instructions how to submit pictures and needed information. 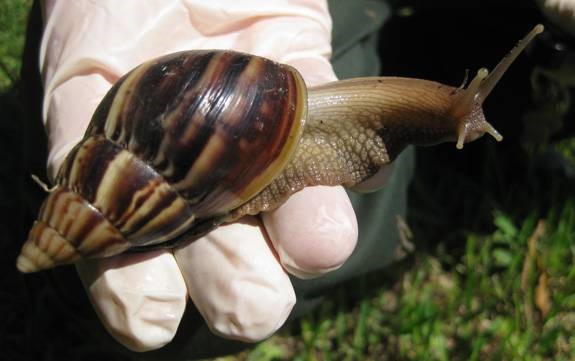 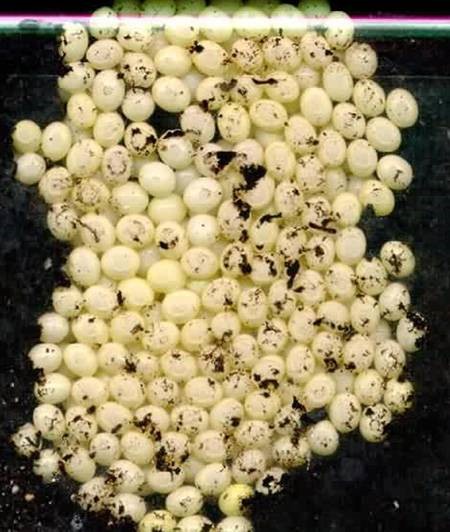 Check these out for more reading.