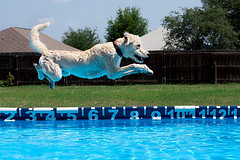 “The click always ends the behavior.” “You always treat when you click.” Those of us exposed to years of clicker training have heard these absolute statements and many more. Initially, I did not question these statements, but my dogs did. My dogs had other plans for me. They did question; they challenged; they stretched; and pulled, and shaped me. Sometimes I was kicking and screaming regarding their “instruction”, other times I was a willing pupil. In the end, the dogs were always right.

So where did these absolute statement come from? I suspect that they carried over to us from traditional training. Having started out as a traditional trainer myself, I had spent years thinking black and white, dominant and submissive, praise and correction. Enter Moose, my first Jack Russell Terrier. He did not “fit” the traditional model and led me to clicker training.

I had trained the poles by shaping three poles and then adding one new pole at a time. I clicked for speed and single stepping the poles and the result was nice, BUT I had dogs that had a tendency to pop, especially one of them would come right out if he heard a noise. Asking around, I realized it wasn’t just me, agility clicker trainers that had shaped the poles seemed to have dogs that tended to pop the poles.

What I had failed to recognize was that I was training that the click equals stop weaving and get your reward. The click classically conditioned my dog to pop out of the poles and via generalization any noise while weaving came to signal reward time. I have two Border Collies, and both had a tendency to pop. Hey, who is training those dogs? The evidence seemed overwhelming that it was something I was doing in my training. Funny isn’t it how it always comes down to us?

Enter Stevie. Stevie taught me exactly this lesson: noise equals pop. If you teach me that the click ends the weaving behavior then I will generalize that to any noise, because I am a Border Collie and we do things like that.

Initially my response was to tape my mouth shut in the competition ring and to proof the poles like crazy at home. The problem was that my proofing did not generalize from home to competition. While I had to work very hard to get him to pop in training, in the ring if I made a hiccup he was out of the poles. So I started to think, why is Stevie popping the poles in the first place? The answer was obvious, if I make a noise, or he hears a noise he assumes it is a bridging stimulus and that he is done weaving. I decided that what I really wanted was for the poles to be the cue to continue weaving. If there was another pole in front of the dog, this needed to be more salient to my dog than any noise. The act of weaving needed to continue even if a click had occurred.

My second lesson was that what happens after the click matters. I thought I had already learned that lesson, but apparently not. The click marks the behavior, but the other behaviors that the dog engages in prior to receiving the reward are part of what you are training. This lesson was bitter, because I realized rapidly that I had trained my dogs to pop and had then rewarded them for it. Ooops! However, I thought I was training something entirely different. Why can’t you just get what you want, instead of what you train? Apparently, my human-dog mental telepathy was not in effect after all.

When my “the click does not end the behavior” light bulb finally came on, you should have seen the look of relief on Stevie’s face. (I don’t think he thinks we humans are very smart, nor that we are very trainable.) With the help of Kay Laurence, and Karen Pryor, I devised a new plan. The click will not end the weaving behavior. The area of reward for the weaves is at the end of the poles, no matter if there are 6, 12, or any number. The click may come anywhere along the 12 poles, the dog continues to weave until he reaches the area of reward. For example, I may click the entrance, but my dog will continue to weave until he runs out of poles and then he will get his toy.

The first experiment was to see how my own dogs responded to the “new” method. Surprise, they loved it! The Collies sighed and looked at me like “finally” the woman is getting it. They wanted to keep weaving and not have their flow interrupted by my “training”.

Enter more “test” dogs. The benefit of owning my own school is that I have a staff of eight people who are open-minded and willing to try new stuff. By the end of the week, we had a variety of dogs weaving using the “new” method. Consistently we learned that the dog’s trained to pop needed to be re-cued to perform the weaves. A training session would look like this:

Handler: click!-“weave!” Waiting until the dog reaches the end of the poles to reward with either food or a toy toss.

Most test dogs that had been taught to pop on the click did require some help from the handlers body to prompt them to continue weaving. However, if you clicked and re-cued the dog for weaving a pole away from you, rather than a pole coming toward you, the physical prompt was less or not necessary. Regardless, in a few sessions I was able to begin moving away from my dogs, and get weaving independent of my position.

We have found that the dogs that had not been trained to pop when hearing the click, do fine using the new method of “the area of reward” being at the end of the poles. It was not necessary to re-cue them to get them to continue weaving it is what they wanted to do anyway. This is why back chaining is such a successful method of training, the dog is always moving toward what is familiar. Familiarity is reinforcing.

So all of this got me thinking some more, when in agility does the click end the behavior? Really, I can’t think of a single behavior in my system of training. I trained my dogs to hold the sit and down positions even if I click. I have done the same with the contact targeting behavior; they hold the target position even if I click. They only leave target position when I release with “okay”. This gives me the advantage of being able to choose to reward either the hold or the release.

Clicker training offers us a rare gift. It is the gift of never ending learning. One lesson that I seem to be learning repeatedly is that there are very few absolutes and that most training solutions require thought and flexibility. Maybe it will stick and generalize this time, regardless; my dogs and I will be part of each other’s joyful training journey.