Positive punishment is when you add something unpleasant when an undesirable behavior is displayed to discourage that behavior.

Negative punishment is when you take away something pleasant when an undesirable behavior is displayed to discourage that behavior.

Positive reinforcement is the addition of something pleasant when a desired behavior is displayed to encourage that behavior.

Negative reinforcement is the removal of something unpleasant when the desired behavior is displayed to encourage that behavior.

Positive punishment:
Spanking a child when they talk back

Negative Punishment:
Getting your rights taken away after committing a crime

Positive Reinforcement:
Getting a raise when you perform well

Negative Reinforcement:
Annoying dinging in car stops when you put on your seat belt

punished and we have all punished. Due to our knowledge that punishment is unpleasant it is uncomfortable to think about exactly how we use punishment.

However, punishment is familiar and as people and trainers we tend to gravitate toward what we find familiar as this is much easier than coming up with new ideas.

Punishment is popular – in our society we are surrounded by it. Managers use punishment to control employees, teachers use it to discourage misbehavior in the classroom; this popularity of punishment makes it seem like using punishment is acceptable.

The thirst for punishment seems to be driven by people’s desire to control, ironic considering people actually control very little. The very fact that all of us are almost always at a loss of control seems to be the driving force behind the need for control. The best dog trainers seek perfection, and it is this desire for perfection that can cause a desire to totally control their dogs. On the surface this concept of “total control of the dog” sounds ideal, the trainer gets total obedience and the dog gets rewards. However, invariably the dog will make errors. These errors clash with the concept of total control and can pave a road to the use of punishment.

We are conditioned to notice errors – when exceptional behavior goes unnoticed, we cannot reinforce it.

While each individual is responsible for how they choose to train their dog, society has primed us to choose punishment. As young children the conditioning begins in school when errors are marked in red. We are conditioned to have laser-error-vision which is programmed to see errors rather than exceptional behavior. When exceptional behavior goes unnoticed or is taken for granted the opportunity to reinforce it has passed.

Another dynamic intertwined with punishment is blame. Blaming is fun because it means that somebody else is at fault so someone else will suffer for the error. First you blame, then you punish.

But I was Punished 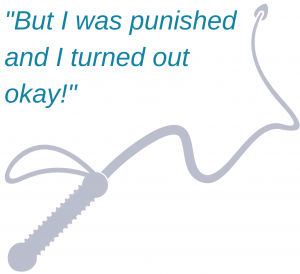 When a trainer uses punishment it is reinforcing to the trainer in several ways:

All this ensures that trainers using punishment will never be sure whether they are using it because it truly was the last resort or because they have a history of being reinforced for using punishment. (Murray Sidman, Coercion and its Fallout)

Traditional trainers, trainers who use choke collars and leash corrections, insist that correction-based training is both faster and more effective. However, both punishment and reinforcement require appropriate timing to be effective. Experienced trainers know what type of punishment will invoke the best results. Consequently, a lot of trainers lack the knowledge of how to creatively use reinforcement. This is one reason why some

Both corrections and reinforcement require appropriate timing. A poorly timed leash correction will be ineffective. Poorly timed reinforcement will also confuse the dog the dog. The difference in outcome between these two training techniques is that the incorrectly rewarded dog is less likely to quit working, react stressed, or develop a poor attitude, as the improperly corrected dog may. 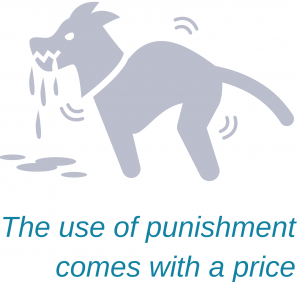 Nothing is free – the use of punishment comes with a price. Extreme punishment causes seemingly insane behavior. Several years ago there was a shocking story of a circus elephant that “went mad” and attacked its handler and trampled spectators before it was shot to death on the street. In a follow up story, it was announced that the elephant’s trainer had used cruel training techniques. Many examples of the resulting dogs with horrid behaviors caused by excessive punishment can be witnessed at any local animal shelter.

The bottom line is that punishment erodes your bond with your dog. Likewise positive reinforcement strengthens that bond. It is important not to confuse the submissive licking and

groveling of a punished dog with bonding. A physically or verbally corrected dog will frequently lick the face of the person who just punished them. This is not bonding. The dog does this to signal submission – they lick you to show you that they are not a threat to encourage you to stop harming them.

Both punishment and reinforcement are subject to desensitization. This means that when a trainer resorts to the use of a shock collar, if that collar is used to administer a great deal of shocks the shocks will need to become stronger in order to be effective. Dogs that are shocked will develop a tolerance for being shocked. The opposite can also occur, this means that the shocked dog sensitizes to the shocks and actually reacts stronger to the punishment. This sensitizing response can trigger panic. (Pamela Reid, Excel-Erated Learning)

The fact that dogs can desensitize to the use of a shock collar can then lead to abuse. The same process of desensitization can occur with other forms of punishment. A swat becomes a slap, a slap becomes a smack, a smack becomes a kick, and so on.

Reinforcement is subject to the same dynamic of desensitization. If a trainer always gives the dog, the same treat in the same way the treat will become less effective. This is one reason that if a trainer chooses to train with food the dog should be hungry during training times and the food should be varied. (Karen Pryor, Don’t Shoot the Dog)

Punishment Means the Dog is at Fault

Human logic dictates that fair punishment is the result of mistakes on the dog’s part. However, the dog’s mistake could be caused by many other factors, some of these are:

Mistakes are training or handling related, not the dog’s fault

Is Punishment Stronger than Reinforcement?

Punishment elicits dramatic results. A dog that is shocked is highly motivated by the pain she has received to avoid further shocking. A dog that is beaten for messing in the house will go to extreme measures, such as eating her stool, to avoid future beatings. All this evidence suggests that punishment is simply stronger than reinforcement.

punishment will never strengthen a dog’s bond with his owner

However, punishment will never strengthen a dog’s bond with his owner. It is that bond that is proof that Reinforcement is stronger than Punishment.

Creativity and out-thinking your dog are more work than a quick pop. If more trainers chose to dream up doggie-reinforcement-fantasies all dogs and trainers would benefit. Dogs are amoral; we are not. Who has the moral obligation to try to do better?

Coercion and its Fallout by Murray Sidman.
Don’t Shoot the Dog by Karen Pryor.
So Your Dog is Not Lassie by Betty Fisher and Suzanne Delzio.
Behavior Problems in Dogs by William Campbell.
Train Your Dog the Lazy Way by Andrea Arden.
Culture Clash by Jean Donaldson.
Dogs are from Neptune by Jean Donaldson.
The Man Who Listens to Horses by Monty Roberts
Purely Positive by Sheila Booth.
Excel-Erated Learning: How dogs learn and how best to teach them by Pamela J. Reid.
“Of Hostages and Relationships” by Suzanne Clothier, www.flyingdogpress.com.
“The shocking truth about shock collars” Animal Behavior site www.apbc.org.uk/article2.htm.
*A version of this article was published in APDT Chronicle of The Dog