A Look at Punishment in Dog Training 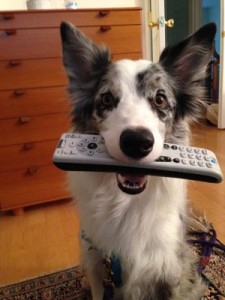 Recently, I was at a competitive dog sport event. In the competition, each dog was supposed to retrieve an item and bring it back to his owner. This was a key component of the activity – repeatedly “fetching” and returning with the item.

Except on this day, one dog, a rather sedate fellow of a retrieving breed that you might have thought would have excelled in this activity, picked up the item, but didn’t bring it back. He stayed near the owner, but just out of reach, trotting nervously around. The owner spoke harshly to the dog and eventually caught the dog by the tail and then grabbed his collar, roughly pulling him back to the activity so that he could continue. Much of that dog’s turn was spent with the owner trying to catch him, fussing at him, and “correcting” him for his misbehavior. Teaching him a lesson, you know. He has to be punished for not coming back, you see.

Punishment doesn’t work like most people think it does. Dogs’ brains make connections between actions and consequences, but the trainer is not in complete control of what actions a dog connects with what consequences. Rough handling is often connected to the handler, not the action the dog is engaging in at the time the grabbing, yelling, and jerking is happening. In fact, by the time a handler delivers that kind of punishment, it is likely that the dog is no longer performing the undesirable action at all.

For example, imagine that you come home and find urine on the floor. You only have one dog so you know he is responsible for it. So you point at the mistake and yell at your dog. And your dog has no idea what you are yelling about.

He may eventually connect you being in the room with him and a puddle as being a bad thing, but it is unlikely that he will ever realize that he made the puddle and that if he had chosen to potty elsewhere, you would not have yelled. He may look guilty, but that is simply a sign of submission. He knows you are angry and he’d like you to stop being angry, so he tries to communicate that via body language.

Some dogs may even take it one step further and avoid you if there is a puddle present. But the dog will not stop making puddles as a result of you yelling about them after the fact. They simply cannot understand that line of thinking.

Plus, punishment only tells a dog what not to do, if you are lucky enough to get that message across. It doesn’t show him the desired behavior. So if your dog somehow figured out that him peeing in the kitchen is a bad thing, how does he know that peeing in the living room isn’t okay?

It seems simple when you are referring to housebreaking, but even complex behaviors are treated similarly in a dog’s brain.

So our non-returning retriever collected the object as requested by his owner, but he didn’t bring the object back. Why not?

Well, I don’t know the dog and I don’t know the owner, but I will make a few guesses. Perhaps he found the noise, crowds, and smells distracting or stressful and he was unable to perform the rest of the job. Or maybe his owner was nervous and behaved or smelled a little unusual and this made it hard for the dog to understand his task. And, possibly, this dog had on some previous occasion not brought the item back and he was punished and now he thinks that letting his owner get near him while he has the item might result in a similar punishment.

Sadly, by punishing the dog when she caught him during competition, the owner created or reinforced the idea that being by the owner with the item is a bad thing. This is very unlikely to result in a better performance the next time these two compete. Plus, this kind of “training” often results in distrust of the handler and unhappiness for both handler and dog. The same is true for housebreaking mishaps and other canine misbehaviors that are often “corrected” with punishment.

There are many ways to help a dog understand what you’d like him to do, whether that action is as simple as peeing outdoors or as complicated as weaving through poles or bringing back a specific dumbbell. Properly timed reinforcement is key. If you are having trouble determining how to train your dog without punishing him, contact a dog trainer who specializes in positive reinforcement and learn some new training techniques. You and your dog will be much happier for it!