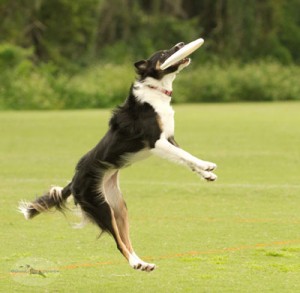 If you attend dog training classes or talk to people who compete in dog sports, you might hear them talking about titles. Are they referring the latest bestselling books? Probably not!

In the dog training world, titles represent accomplishments in specific sports like obedience and agility. Each sport has its own titles and they are generally offered at several levels. In most cases, dogs must proceed through the levels, so a dog with an Advanced title has already completed the Novice title, for example.

The requirements for completing titles in different sports vary. Most commonly, three qualifying scores (called “legs”) are needed to complete a title, with other details like legs earned under multiple judges being part of the deal. Some upper-level titles in some organizations require more than three legs, and, at the championship levels, there are often other requirements as well. Competitors need to be well versed in the rules of the sports they compete in order to meet the specifications and earn advanced titles.

Titles are offered by most dog sport organizations, not just the AKC. When earned in an organization that doesn’t have long registered names, the title abbreviations can still go after the dog’s regular name (known as the “call name”). A dog named Rowdy that earns an Advanced Agility Dog title from the United States Dog Association may be called Rowdy AAD (although I’m sure he’s just “Rowdy” at home).

Championship titles are considered a special accomplishment. Those titles often require that a dog beat other dogs in competition, earning placements or scores in a top particular percent. Championship titles generally go before a dog’s name.

Dog sport competitors are often motivated to earn titles and are excited to reach their goals. Want to earn some titles with your dog? Pick your sport and get started!