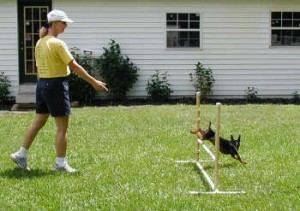 Several dog sports benefit from tight turns. Agility is the most obvious one, but rally and traditional obedience also include about turns that are best done tightly around the handler. Turning tightly is not necessarily a natural behavior because it requires a dog to collect their stride (taking smaller steps) rather than moving in extension, which dogs often do naturally.

Fortunately, there is a fun and easy way to improve your dog’s turns. First, find something that your dog likes that you can throw. If your dog is a ball or disc lover, that’s an easy task. Thrown toys work great as well.

What if your dog doesn’t like to chase thrown objects? If you are training indoors or on closely-cropped grass, you can throw a very visible treat. You may have to experiment to find a treat that your dog likes and that can be thrown several feet. Another option (which can be used more easily outdoors) is to throw a bait bag, small fanny pack, or a specially made treat-holding toy. Leave the bag, pack, or toy’s treat area open so that your dog can get the treats out by himself for maximum impact. You will have to spend a little time showing your dog how to get the goodies before he will be willing to run after the toy.

Now here’s the fun part: cue your dog to turn, and as they complete the turn, throw your toy or treats away from the dog so that the dog is encouraged to turn tightly in pursuit of the object. For example, if you are doing an obedience about turn (where, during heeling, the handler turns to the right and goes back in the direction from which you came), as you turn, release your dog with your release word (a cue that lets him know he can move out of heel position), and throw the toy in the direction that you are now heading. Once your dog catches on, he should pick up the pace as he turns around you in anticipation of fun!

At first, throw the toy simultaneously with the turn so that the dog is “pulled” forward by the toy. Then, complete your turn before throwing and, later, only toss for tight and timely turns. If your dog anticipates to the point of breaking out of the heeling position and running forward without your cue to do so, you might need to remind him to heel as you turn a few times. This is not as much of a problem in agility where running ahead is most often desirable.

Now, go and tighten those turns!